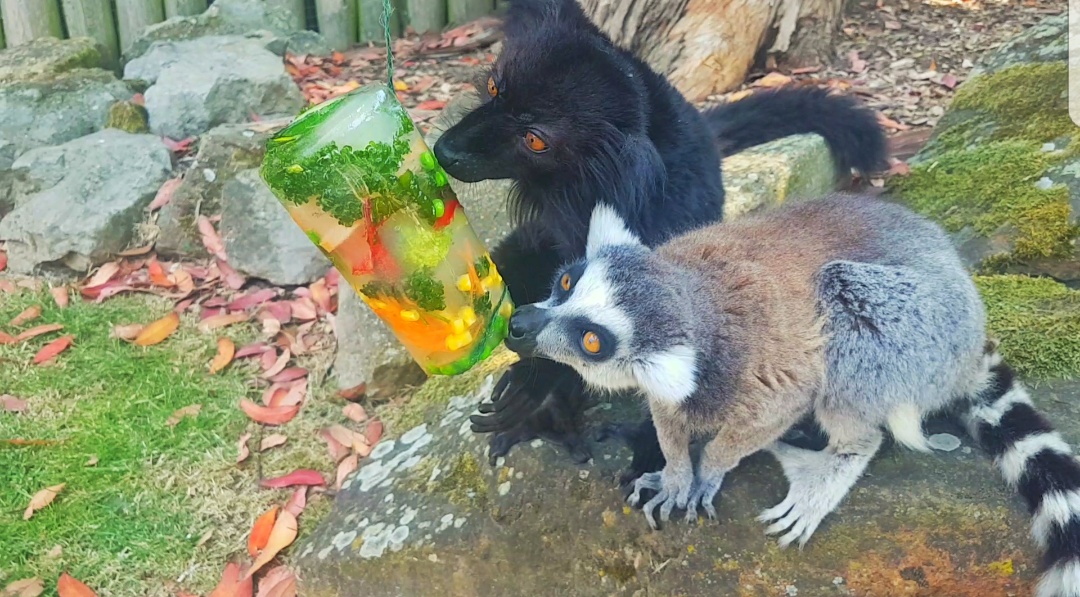 As the UK enjoys yet another scorching day, Zookeepers at Drusillas Park in East Sussex have been finding new and creative ways to keep their animals cool in the sun.

With temperatures soaring up to 25 over the bank holiday and still hovering around 18 degrees and above today, it’s important for zoos to make sure their animals are okay in the heat. Whilst we humans are busy topping up our suntan and grabbing a seat in the beer garden, the animals at Drusillas have been searching for shade and trying to cool off.

Zookeepers have been pulling out all the stops to protect their animals from the heat by making sure they have access to as much water as they need and creating extra shaded areas to keep them out of the sun.

Many of the roasting residents have received food layered ice lollies created from some of their favourite fayre.

These cooling concoctions were served up at breakfast this morning to the cheeky Lemurs in Lemurland. Their icy offerings were packed full of fresh vegetables and herbs and the troop wasted no time in tucking into the refreshing ice pops.

Head Keeper, Sophie Leadbitter, commented: “Animals do not perspire in the same way as humans do, so we use the ice blocks to keep them comfortable in the heat. Ultimately, the animals are after the rewards hidden within, but as they grab at and break down the ice lollies to get the food, their mouths and paws are cooled.”

“Ice lollies are a great way to keep the animals cool, but they also serve an enrichment purpose as well. Making the animals work for their food in creative ways, helps to stimulate them mentally and physically and forces them to use their instincts to look for food as they would in the wild.”

The squirrel monkeys and meerkats were also treated to veggie ice pops to help them cool down, which the greedy groups devoured within minutes. Elsewhere in the zoo animals such as the flamingos have been combating the heat by walking around their waterfall, the capybaras and beavers have been taking long dips in their pool and the red pandas have been napping the day away in the shade of their trees.