As Britain embraces yet another scorching day and prepares for the hottest temperatures of the year so far, Zookeepers at Drusillas Park, East Sussex, have been going to great lengths to keep their animals cool. 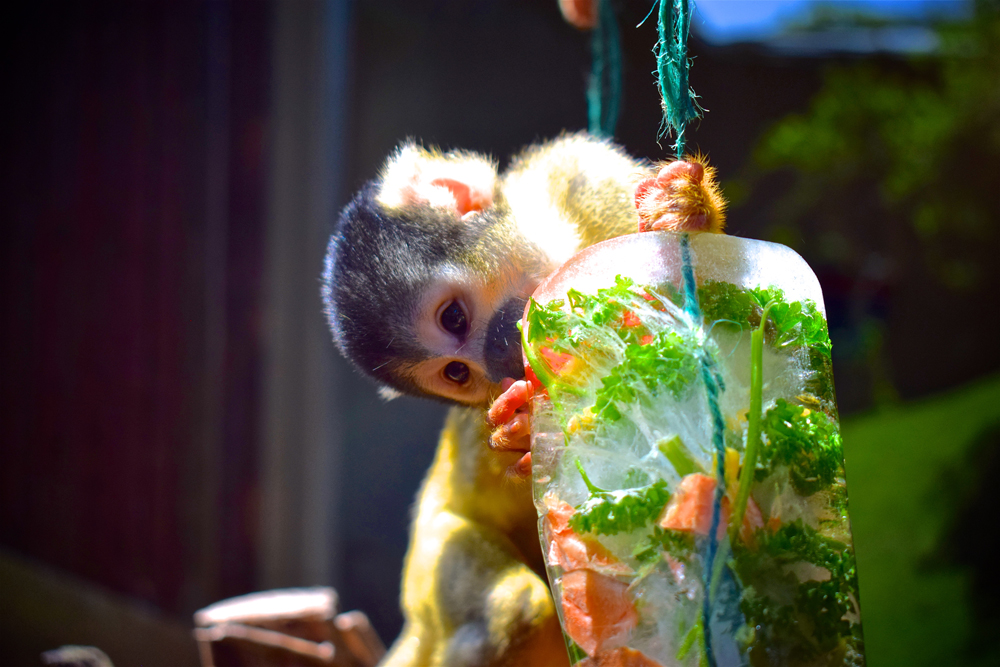 With a scorching Bank Holiday behind us and a warm week to come, temperatures are hovering around 20 degrees and above. Whilst we humans are busy topping up our suntan and lounging around in the garden, the animals at Drusillas have been searching for shade and trying to cool off.

Zookeepers have been pulling out all the stops to protect their animals from the sun. Just like humans, animals can be affected by the heat, so along with ensuring they all have plenty of water and shelter from the sun, the zoo team are also dreaming up fresh ideas to keep everyone comfortable. Many of the roasting residents have received food layered lollies created from some of their favourite fayre.

These cooling concoctions were served up to the cheeky scamps of Squirrel Monkey Island. Their icy offerings were packed full of fresh vegetables and herbs and the troop wasted no time in tucking into the refreshing ice pops. 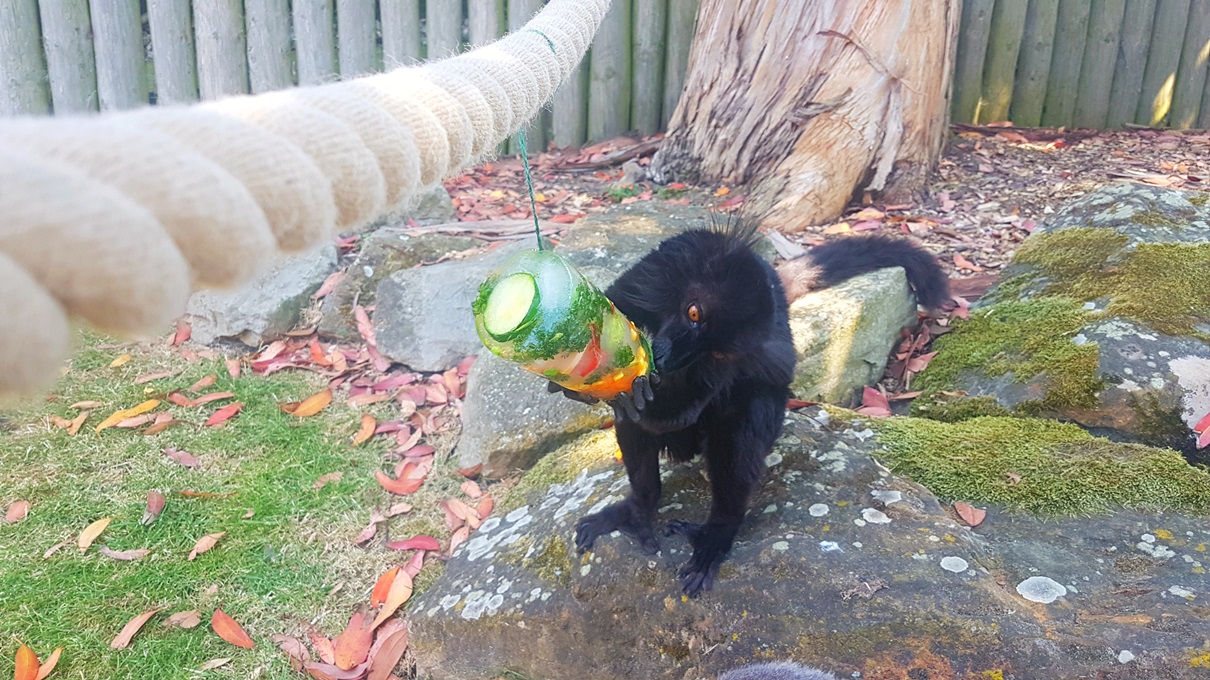 Head Keeper, Sophie Leadbitter, commented: “Animals do not perspire in the same way as humans do, so we use the ice blocks to keep them comfortable in the heat. Ultimately, they are after the rewards hidden within, but their mouths and paws are also cooled during the process.”

“We are keeping a close eye on all of our animals to make sure they are alright in the lovely warm weather. These are not the hottest temperatures we’ve seen in the UK, but it’s still hot enough to burn or get heat stroke, so it’s important to take good care of animals and make sure they are being protected from the heat.”

“If you have a pet, the best thing you can do for them is keep them cool! Lots of water, lots of shade and of course if it’s too hot for you to touch the pavement – it’s too hot to take an animal for a walk.”

The giant lollies not only keep the animals cool, they also form part of their daily enrichment programme, encouraging them to work a little harder for their food as they would in the wild. The animals have fun trying to lick through the layers and the ice has the added bonus of keeping them cool.

Elsewhere in the zoo, the Madagascan lemurs have been loving the heat and can be seen lazing around with their legs and arms outstretched to make the most of the rays. The flamingos can also be seen keeping cool in their pond and taking turns to freshen up in the waterfall. 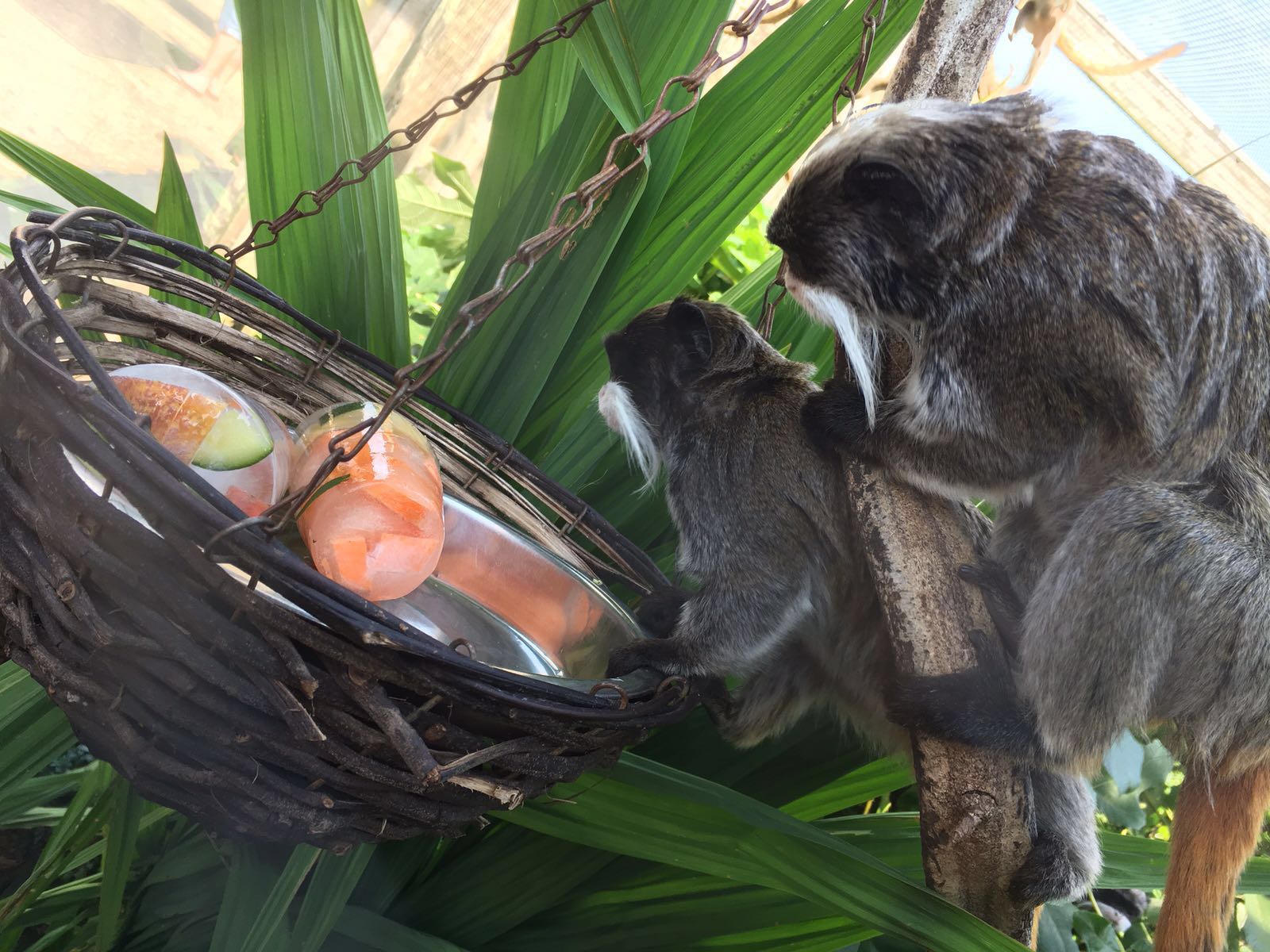