Love is in the air at Drusillas Zoo, as we celebrate the long-awaited, successful love match of two capybaras - just in time for a ‘Capy’ Valentine’s Day.

Clementine and Augustus were treated to a silver platter of raw veggies, at a poolside, specially decorated white linen table setting, complete with flowers and heart decorations. 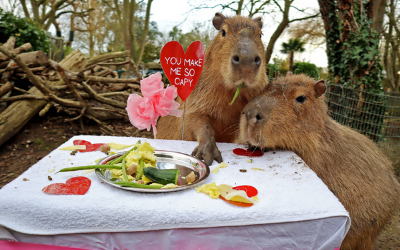 The coming together of the ‘capy’ couple is cause for celebration, as it marks the end of several years of searching for Mr Right for Clementine – who keepers were worried would never find love.

A woman who refused to settle for just anyone, Clementine had rejected many potential suitors over the years, and keepers had almost given up hope of finding her a mate. 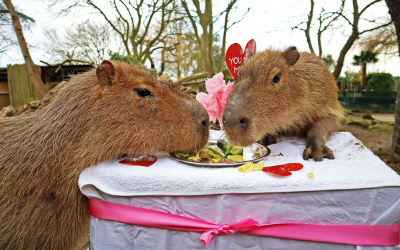 Young stud, Augustus, came onto the scene at the end of last year, and determined to persuade Clementine of his worthy charms, Keepers carried out very slow and careful introductions over the months that followed.

Luckily, confident Augustus was not deterred by Clementine’s typically dismissive behaviour, and persisted over a number of weeks in wooing her. Keepers were delighted when Clementine finally soften her attitude towards Augustus and were thrilled to see her eventually displaying submissive behaviours, with the couple now totally inseparable and settled in the Zoo’s enclosure. 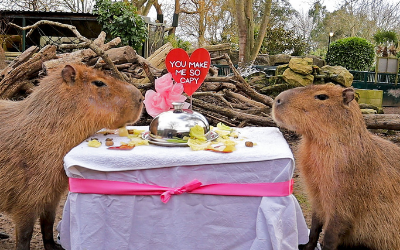 Head Keeper, Gemma Romanis, spoke about the pairing: “Clementine has been here a long time, and is a firm favourite among the team and visitors because she is so people-orientated. She’s very affectionate and loving with us, but in contrast, has been very dismissive and unwelcoming towards other capybaras we’ve tried to introduce over the years”

Gemma continued, “She’s therefore been on her own for quite some time, which started to become frustrating because we knew she would be happier with a companion.” 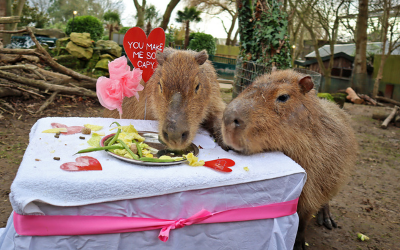 “She is of course still convinced she’s the dominant one in her new relationship, but we’ve observed that Augustus seems to have the final say, and she follows him wherever he goes – so she must be head over heels for her new beau!”

The romantic meal was a fitting way to embrace the blossoming of new love, and the pair have even been displaying some mating behaviours recently, so keepers are hoping to hear the pitter patter of tiny hooves very soon!