As the final festive flourishes are added to Christmas preparations, Drusillas have revealed the animals at the Zoo who have made it onto Santa Paws’ nice list this year… and those who might be finding coal in their little stockings!

Like all parents, our team of keepers have to keep a check on their furry children’s behaviour, with the majority of the animals staying firmly in the good books all year round. But they’ve reported that some of the residents’ cheeky antics just can’t be overlooked, and their cases were put forward on social media with the public voting on who the naughtiest animals of the year were.

Drusillas have now released their official naughty and nice list for Christmas 2021, from naughtiest to nicest – do you agree with the decisions? 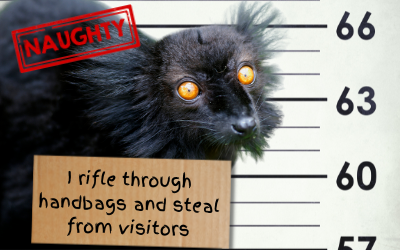 Shadow the Lemur – Shadow has been an infamous member of the Drusillas lemur conspiracy for many years. The first born to leader of the pack, Clementine, it seems his regal heritage gives him a self-appointed licence to live outside of the law. His crime? He’s a pickpocket! Shadow is often caught rifling through handbags and swiping items right out of the hands of unsuspecting visitors. It’s no surprise that he has topped the naughty list this year… and they’re not even sure he cares! 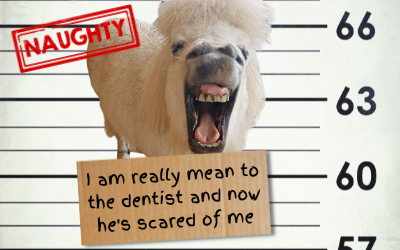 Smudge the Shetland pony – it’s always the little ones you need to watch out for, and this has never been truer than this tiny pony with a big attitude. This year Smudge took a particular disliking to regular dentist check ups, and now has to be sedated for appointments, for the safety of the dentist! 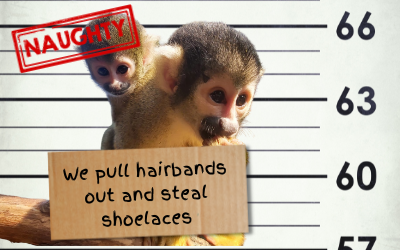 Squirrel Monkeys - the entire troop of Squirrel monkeys leave a lot to be desired when it comes to behaving. Their favourite activities of this year have been jumping all over keepers, pulling hair bands out of hair, stealing out of pockets, and even removing shoelaces. 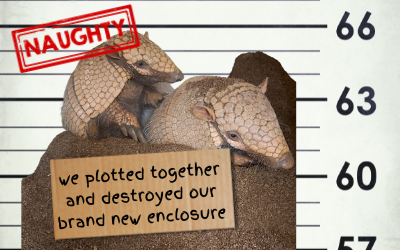 Patsy and Eddie the Yellow armadillos – having only arrived at the Park in the Summer of 2021, Patsy and Eddie didn’t have long to claim their spot on the naughty list, so they got straight to work. They spent their early days clawing at the floor of the brand new enclosure the estate team had lovingly built for them, so much so they destroyed it. 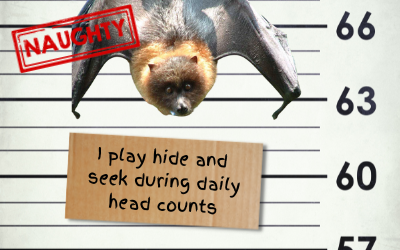 Gomez the fruit bat – a lesser crime some may say, but Gomez has developed a new game where he plays hide and seek from the keepers during daily head counts… except he forgets to tell anyone he’s playing. 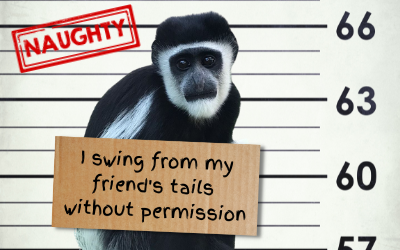 Domino the colobus – colobus are known for their long and very beautiful tails, but resident teenager Domino, has also decided these make great pieces of gymnastics equipment and keeps swinging on the adult’s tails without permission. 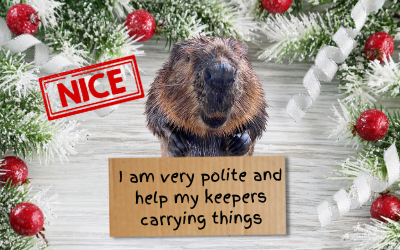 Beavers - First up on the nice list are the ever-polite beavers. Norbert, Daggett and Jasper have taken it upon themselves to help with their enclosure cleaning, and often help carry items from the cleaning bucket for the keepers. 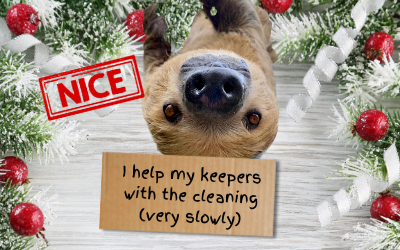 Gordon the sloth – another cleaning enthusiast, lovely Gordon obviously doesn’t feel comfortable with watching his keepers do all the work, so he now makes his way down to the cleaning bucket and (very slowly) hands the sponges to them. 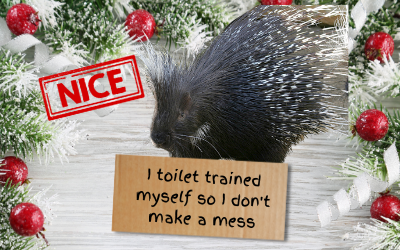 Spike and Rose the porcupines – although working with animals is wonderful, any keeper will tell you that cleaning up after them isn’t exactly glamorous, but Spike and Rose have made that part of the job so much easier by toilet training themselves and only using one neat little corner when nature calls. Einstein the Saki monkey – in an unexpected, almost human display of gratitude, sweet monkey Einstein has begun gathering ‘nice’ stones from his enclosure before feeding time and offering them to the keepers as payment for his meals. 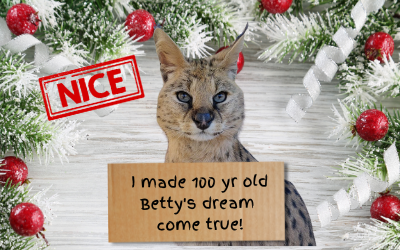 Nwela the serval – there was absolutely no doubt that Nwela would be top of nice list this year after her wonderful act of kindness towards Drusillas’ longest standing supporter. Nwela was so well behaved during her training sessions, that keepers were able to invite 100-year-old serval enthusiast Betty inside the enclosure for a once in a lifetime special encounter. Betty has supported the servals at Drusillas since the 1960s and Nwela made her lifelong ambition to meet one up close possible!

Zoo Animal Manager, Mark Kenwood, said: “The animals we care for at Drusillas really do become our children in a way, so leading up to Christmas we are always telling the cheeky ones that they need to behave or Santa might not visit them! But don’t worry, even those on the naughty list will be getting some extra love this Christmas… it’s hard to stay mad for long!”