Drusillas Zoo Park are ecstatic to announce the safe and healthy arrival of a beautiful baby sloth – who’s surprise arrival has delighted their team of keepers.

On the morning of 29th November, keepers couldn’t believe their eyes when resident sloth female, Halina, wondered down from her bed to say good morning and had a new addition tenderly clinging to her.

Upon discovering the sloth-sational arrival of what is now the second sloth born at Drusillas Park, the keeping team immediately jumped into action, tending to the tiny babe. 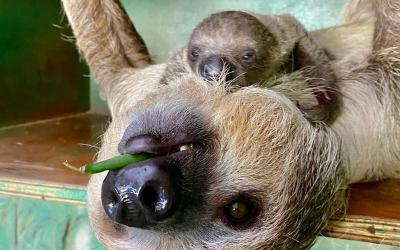 With the new arrival, Drusillas now boasts five Linne’s two-toed sloths in their collection, including six-year-old Flash who was hand-reared by the Park’s resident sloth specialists, Mark Kenward and Gemma Romanis.

Sloths are notoriously difficult to predict pregnancy in, due to the lifestyle they lead - remaining inactive for the majority of the day in a state know as ‘active rest’. They also famously spend most of their time curled up in a big, hairy ball and don’t exactly shout about the fact they are expecting. 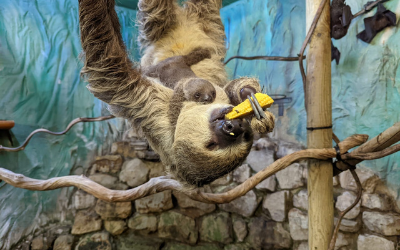 Sloths do not always present a big, pregnant abdomen as with most mammal species, as they have 47 ribs that encase their bodies. It is also very difficult to detect pregnancy through the increase in body weight as sloth go to toilet so infrequently. When they do finally decide to use the toilet, they can lose a third of their bodyweight in one sitting!

Zoo Animal Manager, Mark Kenward, spoke about the surprise arrival; “We are always prepared for the birth of new infants as we know this can happen at any time. Gemma and I remained at the zoo late into the night to make sure everything was moving in the right direction, with this being Halina’s first born. Whilst baby and mum looked very healthy, the baby on occasion got a little confused and would climb onto dad Sophocles, remaining attached to him for a number of hours.”# 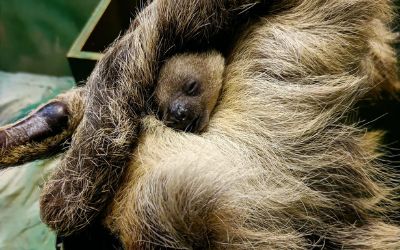 “Male sloths don’t usually have anything to do with the rearing of young” Mark continued, “and wouldn’t normally take too kindly to an infant climbing all over them. Sophocles however was amazing and accepted the baby happily, giving Halina the chance to rest - but we did need to get the baby back to Halina to begin feeding.” 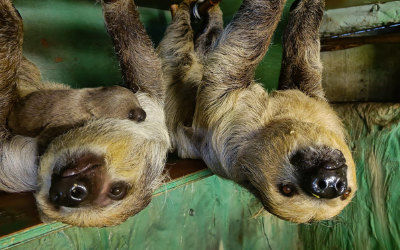 “Late into the evening, when sloths are most active, we calmy removed the baby from Sophocles and placed it back on Halina, but not before we had a chance to quickly weigh and check the gender. Halina and the baby - which we now believe to be a female - have been closely monitored ever since. The baby has been feeding really well and received the all-important colostrum from mum.”

Head Keeper, Gemma Romanis, added; “We are absolutely thrilled to bits to share this exciting news with you all, the new arrival is something we are immensely proud of as a team. Baby seems to be thriving under the careful watch of our keepers, and is doing everything she should be at this stage. Halina is being wonderfully attentive, and considering this is her first baby, it seems to have all come very naturally to her.” 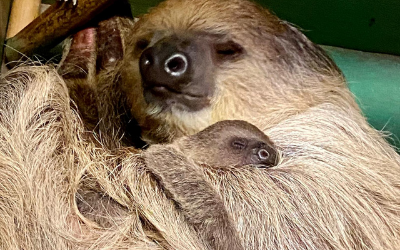 The delightful youngster is already becoming a highlight for visitors lucky enough to catch a glimpse of her peacefully snuggled into mum, in one of the Zoos walkthrough enclosures.

As part of their commitment to conservation, in particular the conservation of sloths in the wild, Drusillas proudly supports The Sloth Conservation Foundation and ask visitors to support their mission in any way they can here https://slothconservation.org/.