Hang out with us all year round for only 22p a day!

A touching and emotional moment was made possible for 100-year-old cat lover Betty Morris this week, as she was invited to a specially arranged, one-off close encounter with serval cat Nwela at Drusillas Park – an experience that had been a lifelong ambition. 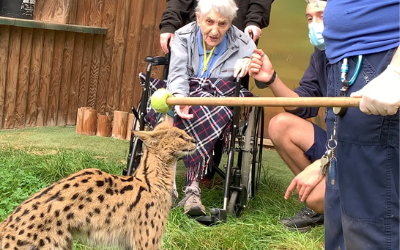 Animal enthusiast Betty has supported the Zoo’s serval cats for many years by way of adoption, and has become a fond member of the Drusillas family with her irresistible charm and undeniable passion for animals – in particular the serval cats, whom she first became aware of at Drusillas. 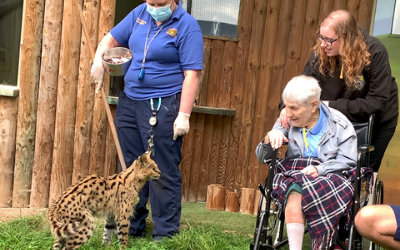 On 1st September 2021, Betty was invited to visit the Zoo before their public opening time and was accompanied by Keepers into the serval enclosure to enjoy a unique nose-to-nose experience. Head Keeper Gemma led Nwela through a practised routine using a training stick, food and a clicker, to bring her near to Betty’s wheelchair.

After the encounter, Betty held back tears as Deputy Managing Director, Cassie Poland, presented her with a surprise honorary serval adoption and a large, personalised plaque that was hung outside the enclosure to mark the beloved relationship Betty has with the servals. 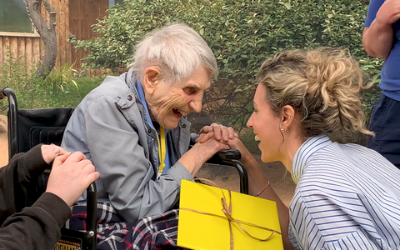 Betty spoke about the experience: “This has always been on my bucket list! It was wonderful… Nwela came right up to the side of the wheelchair, and it was such a privilege. I’ve had a special soft spot for servals ever since Drusillas got them… this means an awful lot to me”

Beautiful serval Nwela - who joined Drusillas from Banham Zoo in April 2021 - was hand-reared as a youngster and as a result has had lots of experience around humans. Once Nwela started to settle in and it became apparent how much she enjoyed her training, Keepers at Drusillas conceived the idea of finally making Betty’s dream of meeting servals come to fruition. 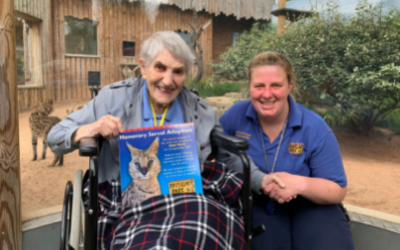 “The whole team at Drusillas are incredibly fond of Betty, it’s really hard not to be!” commented Head Keeper Gemma Romanis. “We love updating her on her favourite big cats when she visits, and she’s put so much time in over the years to get to know each serval we’ve had.”

“When Nwela joined us and I was able to continue her training, it didn’t take long for the idea of an encounter for Betty to come up - and everyone was on board without hesitation. How many opportunities do you get to fulfil someone’s life ambition?” 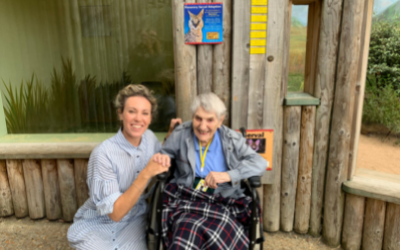 Not typically an animal that can be involved in close encounters, the idea was carefully considered, planned, and tested by the Drusillas team. Keeper Gemma spent weeks preparing and training Nwela for her moment with Betty; gradually introducing her to a wheelchair in the enclosure, choreographing a routine that included a few safe moments close to Betty, with several rehearsals before the big day.

Gemma continued: “Knowing how important this would be for Betty, I wanted to make sure the experience was as successful as possible, and it also gave Nwela and I an opportunity to bond, as she was missing the relationship she had with her previous keepers. I am immensely proud of how well she did and it’s an honour to be able to work with such an amazing animal.”

Betty celebrated her 100th birthday at Drusillas in May and was treated to close encounters with their resident meerkats, lemurs and armadillo – and now she can cross serval encounter off her bucket list! Her granddaughter Kirsty, who accompanied Betty during the serval encounter, gifted her an annual membership and Betty visits as often as she can.