As Britain embraces yet another scorching day, Zoo Keepers at Drusillas Park, East Sussex, have been going to great lengths to keep their animals cool.

With current temperatures exceeding those in the Mediterranean, Drusillas has been pulling out all the stops to protect their animals from the heat. Just like humans, animals can be affected by the heat, so along with ensuring they all have plenty of water and shelter from the sun, the zoo team are also dreaming up fresh ideas to keep everyone comfortable.

Many of the roasting residents have received food layered lollies created from some of their favourite fayre.

These cooling concoctions were served up to the cheeky scamps of Squirrel Monkey Island. Their icy offerings were packed full of fresh vegetables and herbs and the troop wasted no time in tucking into the refreshing ice pops. 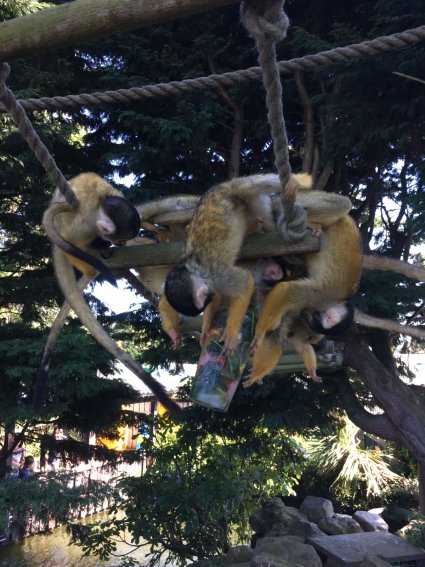 Head Keeper, Mark Kenward, commented: “Animals do not perspire in the same way as humans do, so we use the ice blocks to keep them comfortable in the heat. Ultimately, they are after the rewards hidden within but their mouths and paws are also cooled during the process.”

Down on the Farmyard, Drusillas’ sunbathing kune kune pig Peppa, has been receiving some extra pampering. Whilst she basks in the sun, Deputy Head Keeper, Sophie Leadbitter, has been smothering her in high factor sun cream to protect her delicate skin.

But that’s not all the happy hog received! Along with a giant frozen food block full of tasty treats, she also has a large bath ready and waiting for her to paddle in and cool off.

Zoo Manager, Sue Woodgate, commented: “We are keeping a close eye on all of our animals to make sure they are alright in the lovely warm weather. We are also paying particular attention to our animals with pale skins, such as our llamas and pigs, who like our keepers, need to wear plenty of sun cream to stop their skin from burning.”

The giant lollies not only keep the animals cool, they also form part of their daily enrichment programme, encouraging them to work a little harder for their food as they would in the wild. The animals have fun trying to lick through the layers and the ice has the added bonus of keeping them cool.

Elsewhere in the zoo, the lemurs have been loving the heat and can be seen lazing around with their legs and arms outstretched to make the most of the rays. Oli the giant anteater has also been enjoying the sun, and can be seen having great fun alternating between a dip in the pool and a stroll through her sprinklers.