They might not win against Andy Murray or even do particularly well in a beginner’s tennis class, but nevertheless, a few of the animals at Drusillas Park have been showing off their sporting prowess in the lead up to Wimbledon.

Inspired by the Wimbledon Championships, a feast of tasty treats were served up to meerkats Hari and Oleg, Prince the royal python, and Gretel the armadillo. Gretel and Prince took to the court solo to show off their tennis skills, whilst Hari and Oleg went head to head in an intense singles match. 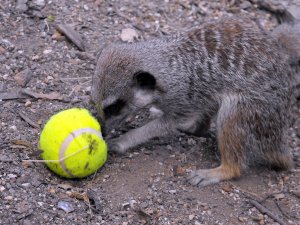 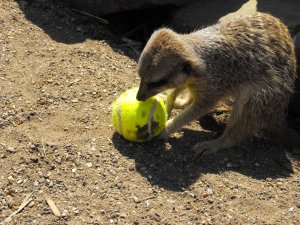 The strange service was made as part of the zoo’s enrichment programme, which ensures a diverse diet is enjoyed in imaginative and unusual ways. Enrichment is carried out within all the enclosures on a daily basis to encourage the animals to work a little harder for their food as they would in the wild as well as providing mental stimulation.

The unusual delivery proved a real smash with the whole set, who after batting the balls about managed to polish of the remaining food in minutes. 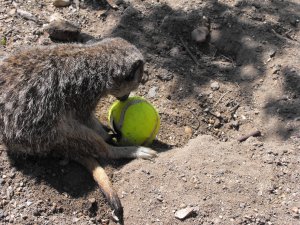 The meerkats took full advantage of their lunch-time munch dished up in the customised balls. The pair rallied around the prized platters taking the balls near to break point, as they excitedly dug out their dinner.

Hari was first to make an approach and proved the top seed. His fierce approach to tackling the ball saw a knockout win for the plucky meerkat. Oleg gave the match a bit of attention and briefly brought the score to deuce. A little while later Oleg lost interest and Hari stole the win. 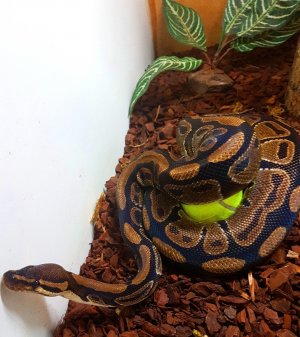 The other contestants didn’t display an awful lot of talent; Gretel the armadillo played a good first half before giving up to dig furiously in the corner, whilst Prince the royal python didn’t quite get to grips with the game and instead coiled around the tennis ball keeping it safe from any further game play. 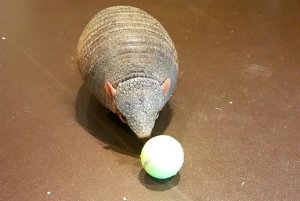 After watching a few interesting sets, Drusillas have decided to pin all their Wimbledon hopes on meerkat Hari, who seems to have quite an aptitude for the sport. Although, the jury is still out on whether sitting on your team mate to stop them getting the ball is strictly allowed…