Our group of meerkats have successfully predicted both the quarter and semi-final results of the England’s Women's Euro 2022 games, and the now dubbed ‘mystic meerkats’ have predicted who will win the big final at Wembley on Sunday against Germany.

Using two buckets of treats - each with a team's flag on - the meerkats are offered choice of which bucket they would like to snack from, and the bucket surrounded by the most meerkats is declared the predicted winner. 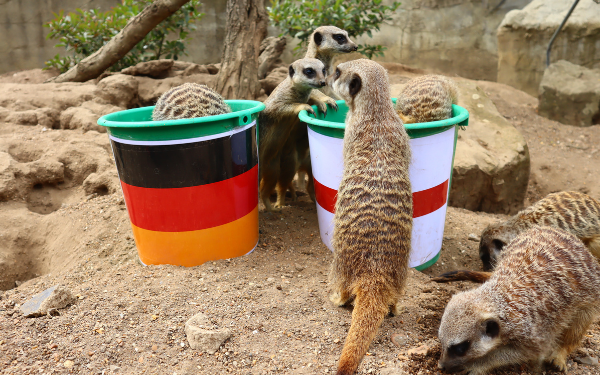 Previously, the mystic meerkats became good luck charms for fans for Euro 2020 with their adorable prediction method, and were invited onto Heart FM with Jamie Theakston and Zoe Hardman a couple of weeks ago to make a comeback and predict the quarter finals - which they got absolutely right.

Keepers asked the mob to predict the semi-final against Sweden which they again got spot on, and so the team are hoping their psychic charms will extend to the final! 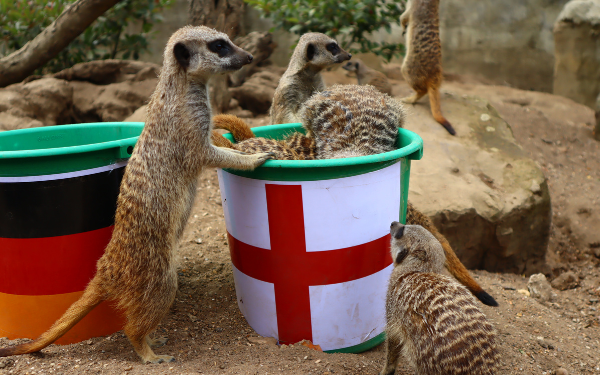 Although it might seem a strange activity for meerkats, the activity is part of the zoo’s enrichment programme, which makes sure all the animals enjoy a diverse diet in imaginative and unusual ways. The activities encourage them to think and work for their food as they would in the wild - and it's now become a bit of a tradition at the Zoo.

Zoo Keeper Jacinta Dawe said: “Our team have been so impressed by England’s performances and team spirit, so it’s been great to get behind the squad and show our support. Although we wish both teams luck on Sunday - it would be incredible for The Lionesses to win as the meerkats have predicted!" 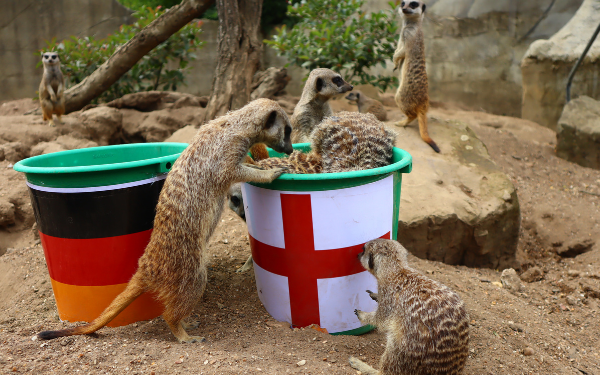 Jacinta continued: "The mystic mob seem to be loving reigniting their psychic powers and now get excited when they see me arrive with the buckets and flags. The mob's matriarch, Tamu, is always first to the buckets letting everyone know what to do, and even our baby is joining in which is so lovely to watch!" 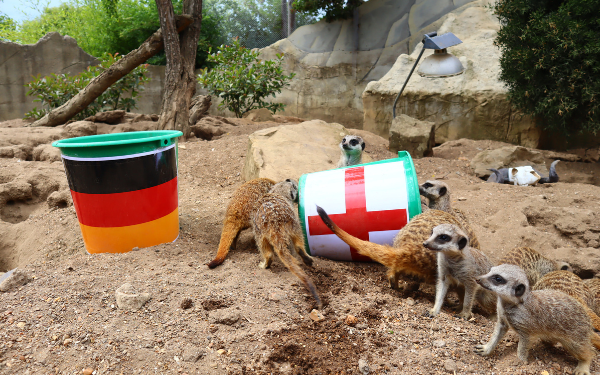 On Thursday, Jacinta placed carefully prepared buckets in the sand, with an England flag attached to one and Germany flag on the other. Then it was down to the mystic mob. The whistle was blown and Tamu and Joey were straight in there, confidently in the England half. Their teammates pushed forward and barely looked at the Germany bucket. The mystic meerkats started to climb inside the England bucket to really make their feelings known, with their little furry behinds sticking out! It was a clear England win, so much so that the mob toppled the England bucket to make their feelings crystal clear. The mystic meerkats are backing The Lionesses and are sure that football really is coming home - they haven’t been wrong yet so all eyes will be on the final on Sunday.

Can the meerkats get a hat trick of correct predictions? Let's hope so!