Love Island may be over but there are definite Casa Amor vibes at the Park this week, where a new bombshell has entered the sand. A new romantic interest has arrived in the shape of a yellow armadillo stud to join current armadillos Patsy and Eddie.

It’s hoped the newly introduced trio will get on well, heads will turn, and eventually become a breeding group meaning we could welcome our first ever armadillo pups. 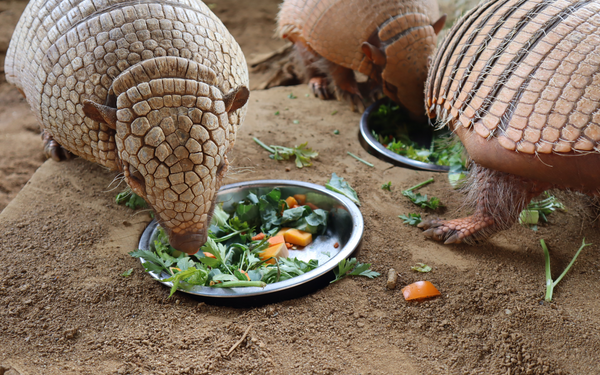 Two experienced keepers from the zoo embarked on a 766 mile road trip to collect the new six banded armadillo male. He is so much larger than their resident females he’s quickly been given the name ‘Tank’ by the team.

The Park welcomed their resident armadillos, Patsy and Eddie, a little over a year ago and have spent quite a while finding the right mate to join them. Initial introductions went brilliantly and so the trio are now happily snuffling and scooting around the enclosure together, and even all share food from one bowl.

“It’s always a tentative time introducing new animals to each other, but our girls are so confident that it didn’t phase them at all having a new friend… and we’ve definitely already seen some flirting going on so I think they don’t mind at all!”

“We’ve got so used to Patsy and Eddie, who are still quite young ladies, that when I collected the new male from Northumberland Zoo, it was quite a surprise how much bigger he seemed. Some of the team started jokingly calling him The Tank, and it’s stuck! He’s a real sweetie though and seems a little calmer than our two boisterous girls so I think he’s going to be a good influence on them.”

Six-banded armadillos are found in the wild across much of South America, in grasslands, rainforests, and plantations. Unlike some other armadillos, the six-banded cannot roll into a ball, and are diurnal so they are most active during the day. 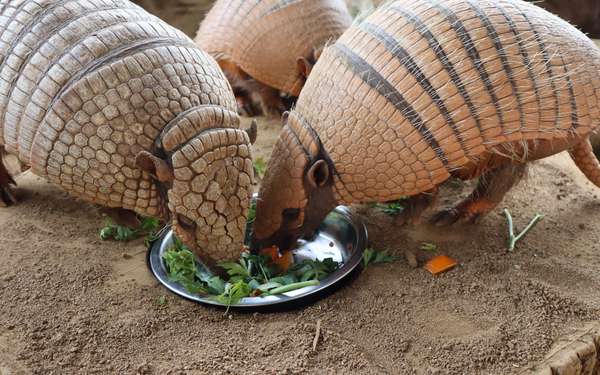 Many of the animals at Drusillas are involved in breeding programmes, often monitored by studbook keepers, to ensure the future survival of the species. Drusillas has never had a breeding group of armadillos, so the team are all very excited about the prospect of a new species that could be born at the Zoo.

Drusillas offer one-to-one close encounters with the armadillos. Tank, Patsy and Eddie will all be taking part in these experiences which involve a 30-40 minute armadillo feeding session with an experienced keeper to answer any questions. An unforgettable experience meeting this cheeky trio- with hard shells and soft hearts!

Book online now
Back to listing