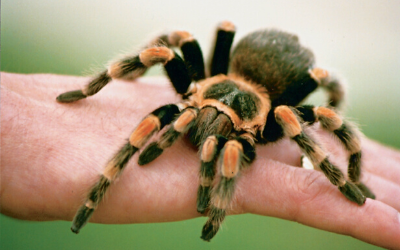 As the weather begins to cool and we enter the autumn season, we should brace ourselves for the annual invasion of eight-legged intruders as spider season is upon us!

It’s also around this time that we see a rise in people with arachnophobia. According to statistics, one in five Britons across the UK suffer from this phobia defined as an ‘intense and irrational fear of spiders and other arachnids’.

But are any of them brave enough to face their fears and sign up to tickle a tarantula or befriend a false widow in Drusillas Zoo Park’s spider phobia course – a morning of peace-making with these misunderstood creatures.

Angela Hale, Secretary of the British Tarantula Society, talks about her (unusually) favourite time of year; “The weather has been better recently over the summer months, and so many of the spiders that we find, particularly the large garden spiders, have been very active and have recently given birth. As the weather cools, males can be seen scurrying around as they are on the hunt for females to mate with – which is why it seems like there are so many more spiders about.”

House spiders that run across your living room carpet, and garden spiders that spin large orb webs on your patio furniture can be expected to be seen a lot more over the next few weeks, alongside the so-called ‘false widow’ spiders, which can grow to around 20mm.

“The good news, however, is that even with more than 650 different species of spider in the UK, none of them are considered dangerous to humans.” Continues Angela, “Of course, if you are a prey creature such as a fly or bug then you may be in trouble, but very few are able to bite us - and those that are, are unlikely to cause any long-term harm.” 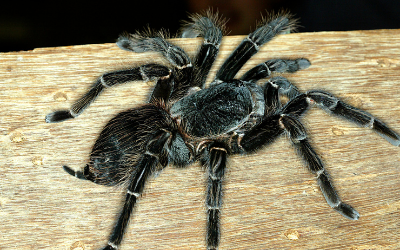 “The much-maligned ‘false widow’ spiders originate from mainland Europe but are no more dangerous than our own native garden spider. The bite of a false widow is no worse than a bee or wasp sting and they will only bite if they feel threatened or are provoked. Of course, people with allergies to stings should take every precaution available to them to avoid being either bitten or stung by anything.”

Angela continues: “There is no real reason to be afraid of spiders. Our native spiders pose no threat to us. They are essential to our ecosystem; they are our friends - not our enemies - so we need to find a way to learn to live alongside them.”

However, it’s no secret that millions of perfectly rational people still suffer with this irrational fear. No matter how hard they try to remain calm when confronted by a spider, the response is always the same; sweating, nausea, panic, rapid heartbeat and sometimes much worse. Do spiders deserve this reputation? At Drusillas, we believe not and are confident our spider phobia course can assist any arachnophobe to not only overcome their fears, but to leave with a better understanding of these much-maligned creatures.

“We have had a 100% success rate, employing patience and expertise to educate people in a calm and controlled environment. We have participants safely - and happily - holding tarantulas and false widow spiders with no problems at all. At times it can be quite emotional overcoming a fear and it’s an amazing thing to witness. I’d be lying if I said there aren’t sometimes a few happy tears shed on the day!”

“This year’s courses take place on Saturday 25th and Sunday 26th September and we would love to meet any local arachnophobes who are willing to trust us and our beautiful spiders!”

Check out the details of our spider phobia courses here… if you dare! https://www.drusillas.co.uk/spider-phobia-course.