Drusillas Park is celebrating a baby boom at the zoo, with four different animals welcoming new bundles of joy!

In June Drusillas delighted in announcing the safe arrival of prairie dog and meerkat pups. Now monkey fans can also catch a glimpse of two squirrel monkey babies, and a critically endangered Sulawesi crested black macaque new born when they visit the Park. 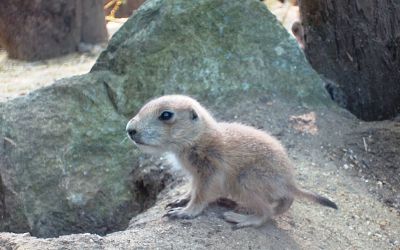 Prairie dog pups don’t pop up from their burrow until they are about six weeks old and can only just now be seen starting to explore outside and socialise. Keepers at the Park believe they were born around the middle of May.

Prairie dogs are native to prairies and open grasslands in North America. They live in underground burrows, with nurseries, sleeping quarters, and even toilets. They live in family groups and like to greet each other with a prairie dog kiss or nuzzle.

Meerkats, Tamu and Tyson, welcomed their twin pups on the 12th May 2021. The pair are seasoned parents and have kept their youngsters very closely protected. They have now started to leave the den alongside their other family members, with a babysitter supervising them at all times.

“We are absolutely delighted with the new arrivals. Our visitors really love to see the baby meerkats and prairie dogs playing and enjoying the sunshine. They are very active little ones and they playfight all the time. All good signs of healthy progress.”

Meerkats are very social creatures, living in complex underground burrows in highly organised groups. Only one pair of meerkats will breed within a mob, giving birth to two to five young at a time.  However, all the members of the group will help to look after the youngsters and share the responsibility of raising the pups. The brothers and sisters of the new arrivals can be seen helping out with duties already.

In the wild, meerkats are native to south-west Africa and are members of the mongoose family.

The 'mystic meerkat' pups rose to fame recently as they correctly predicted the results in a number of England's football matches in Euro 2020. 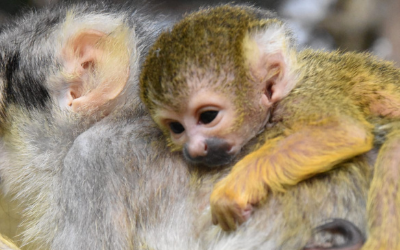 The Zoo has also thrilled in welcoming two new squirrel babies, by two very devoted mums. Squirrel monkeys are highly active and inquisitive monkeys and can be seen being marvellously mischevious at the Park, often interacting with visitors through their enclosure. Their bodies are largely yellow with a black head; their tail is longer than their body and has a black tip. Squirrel monkeys are found in the forests of South America, usually close to rivers and streams. This sub-species is from Bolivia.They only have one baby at a time which clings to its mothers back from birth - visitors can see.

"The squirrel babies are so much fun to watch, and are starting to get involved in a lot of the play amongst the troop... however it's reassuring to see the mums taking them off into the quieter parts of the enclosure when the big boys start play fighting!" 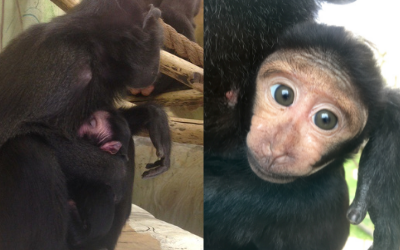 Any visitors lucky enough to have caught sight of beautiful macaque baby Mango will have seen how truly adorable he is! Sulawesi crested macaques are completely black with a short tail and a crest on their forehead raises when aroused. They have a pink bottom that acts as a cushion when sitting on rocks or branches. Sulawesi crested macaques are only found in the tropical rainforests on the Indonesian island of Sulawesi. They live in large family groups that can contain over 100 individuals.

Sulawesi crested macaques only have one baby at a time so Drusillas are thrilled by Mango's arrival - he has already won the hearts of our keepers, and is keeping mum Kira and dad Motek well and truly on their toes (and off their pink bottoms!)

All these animals have long been favourites at Drusillas so the news of the births is really very special.